I first got this screen 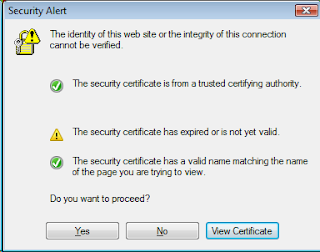 Then when viewing the cert I spotted the date was yesterdays. 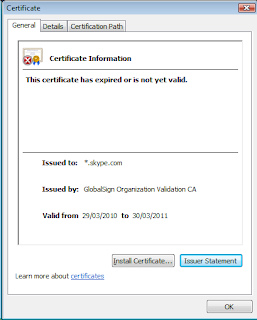 Posted by Adrian Sweeney at 12:06 No comments: Links to this post

I first noticed Brian's book "The Unsuspecting Mage" in the free section of iBooks and SmashBooks.com I find I soon got into the story and by the end of the book I was saying to my self that I hope there is a follow up to this book.  Which I quickly found out there was in fact seven books in the series. All reasonibly priced at £2.99 so I bought them all and read the complete story right through to the end in one amazing go over 2 weeks travelling to and from work.

I see also that he is writing another series of books as a sequel to the original called the "Travail of the Dark Mage".  All I can say is Brian keep up the good work.
Posted by Adrian Sweeney at 14:48 No comments: Links to this post

I think the next big leap in our technology will involve Quantum  Processors.  Is the realm of Sci-Fi going to be in out bedrooms?  Even the equivalent of a bit in quantum terminology "qubits" sounds like it should be something you read about in a piece of fiction not in a news article about a team that are producting a 4qubit processor.  LOL I wonder if your could port a specy emulator to it when they double it ;-).
Posted by Adrian Sweeney at 06:59 No comments: Links to this post

The Hacking for a php wiki site on wiki.php.net has left some to believe that accounts have been compromised.  The PHP Source code has been reviewed from version 5.3.5 to the latest looking for any malicious code that might have been injected into the repository. The checking of commits from 5.3.5 leads me to believe that the hack was found quickly enough.  As stated by The Reg There are no details if the passwords stored on the site were hashed or open text.  If they were not hashed then people should check thier accounts. I believe that all accounts now require a password reset but the important thing here is that people need to also change passwords on other systems that use the same account login information. For example eMail accounts may be breached due to poor password management practices of users.

The Announcement on php.net

"The wiki.php.net box was compromised and the attackers were able to collect wiki account credentials. No other machines in the php.net infrastructure appear to have been affected. Our biggest concern is, of course, the integrity of our source code. We did an extensive code audit and looked at every commit since 5.3.5 to make sure that no stolen accounts were used to inject anything malicious. Nothing was found. The compromised machine has been wiped and we are forcing a password change for all svn accounts.

We are still investigating the details of the attack which combined a vulnerability in the Wiki software with a Linux root exploit."

Posted by Adrian Sweeney at 06:16 No comments: Links to this post

Just thought I woudl wish you all a happy St Patricks Day
Posted by Adrian Sweeney at 07:02 No comments: Links to this post

There is nothing quite like watching the parade having a large bowl of steaming hot stew with potatoes and wheaten soda bread. It's the Sunday before the 17th so birmingham are celebrating in style. The friendly staff of the Irish centre are working flat out serving the beer, the food and the criac. Best of all some wonderful irish music. We finished off going to see riverdance in 3D brilliant

Posted by Adrian Sweeney at 01:50 No comments: Links to this post

The Game is developed by Magnus Lorentzon there is a 1minute 55 second video from YouTube that you should really see.  The game looks great the game play seems simple I think that this will be one of those addictive games that people will be talking about.  Since I don't have an Android device I will leave the review of the game to the guys at phandroid.  I just hope there is a version for this game for us iOS users.
Posted by Adrian Sweeney at 14:20 No comments: Links to this post

From Adobe reader installing Mac Afee scan tool. Or Microsoft installing add-ons in firefox with out asking you. and of course WinAmp changing your default search engine on you.

some programs will install yahoo or google tool bars and you can't select not to install them.

Posted by Adrian Sweeney at 15:11 No comments: Links to this post

I always thought that the spawn points we shit in this game I just didn't realise that they were as bad as they are until I watched a youTube video of the spawn flaws in one map.  Of course this only works if the team work together to hold the "Respawn Spawn Point" in the right location.  But this really needs fixed surely they could be able to have the server pick a random spot out of the "Field of Fire" for people to respawn to. even a 10-15 degree arc would work.

The other thing I did this weekend was read this article about a guy who cheated in a live social game.  The only described rule was that the winner was the one who collected the most coins.  Each person that entered conference got a token (coin).  One guy asks for the bag of coins and its given to him.  Man I laughed reading the article.  This basically describes that the user will play the game in a way the developers didn't think of.  No matter how much you as a game developer develop the rules of a game someone will find a flaw and exploit it.

Whether you find a way to lock people into respawn points or find a naive guy who hands you a bag of coins these issues will continue to be found and exploited.

Gaming companies need to embrace these issues and fix them asap.
Posted by Adrian Sweeney at 04:53 No comments: Links to this post

So I got rid of my mobile last September

I found I was paying £35 a month for the iPhone 3G that I had. and while I was using it the primary function for data (internet activity) and secondary as a mobile.  I also noticed that I only called a very few people and worst yet I received more unsolicited calls than wanted ones.  The iPhone definitely started to make me a bit of an Apple fan boy.  But that was down to the internet activity I was using the phone for.  I also realised that the people I did call the most (family) I knew the number for.  So I took the big step of getting rid of my mobile phone.  I must admit it feels great being not being contactable by marketing people.  My family all have my work number and my home number.

So I sold the iPhone and bought two iPod Touch an 8Gb for the wife and 32Gb one for me.  I can hear most people thinking why you telling me this.  Well the iPod Touch has Facetime and Skype video calls.  I've been making free video calls to the wife nearly every day now for nearly 3 months.  I've made video calls to some friends using Skype and have no monthly bill.  This has saved me £105 pounds in the first 3 months by the end of another 3 months I will have paid for the devices.

The call quality for using Facetime is brilliant my only issue with the Facetime app and I don;t know if this is the same for the iPhone4 is the length of time it takes to make a connection.  I started a call at home between the two devices and it took nearly 30 seconds for the second device to start ringing and then 5-10 seconds to send back and create the connection. Once connected there was no lag between the devices which is really great.


Over all a great product and worth every penny.
Posted by Adrian Sweeney at 05:24 No comments: Links to this post

Got a problem trying to download docs over SSL?

Some people have reported that just setting the pragma header works for them but I needed all of these headers.

Posted by Adrian Sweeney at 01:04 No comments: Links to this post