I happened to be on the Google Maps iPad Application and I went to street view and for some reason it refused to load any graphics. Now we all know that the street view is a series of spheres that you move from the centre point of one sphere to the next sphere as you move down your street and the photos that were taken by the street view cameras are displayed on the inside of the sphere as a texture. Due to the nature of these textures being photos of real life objects. They show distance which means that the texture does not make the sphere look like a sphere 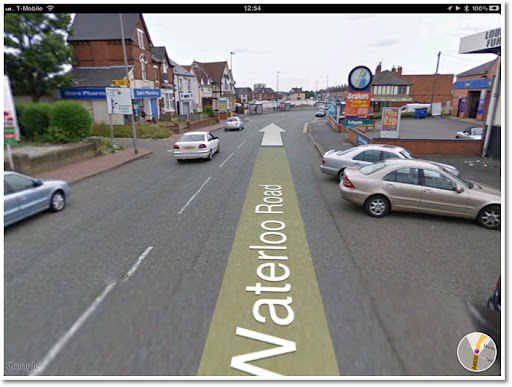 As you can see from the above picture the effect is really good and it doesn't look like a sphere. Now what happens when the google map application refuses to load the photos. 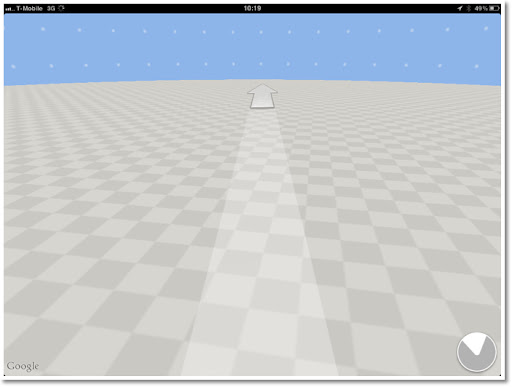 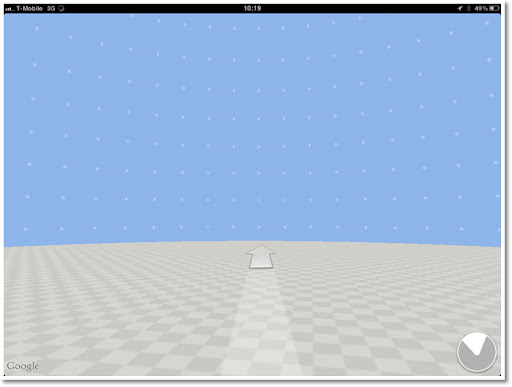 As you can see from the two photos above the background world texture is applied on the blue and yellow bits.
Posted by Adrian Sweeney at 05:01 No comments: Links to this post

Why distributed version control is better than centralised

With a central model like Subversion you have to be connected to the network that the Repository is on.  So you can't take your computer out of the office and use the powerful tools that you get with any version control.  You can't commit any changes so if you do a lot of work you have to wait until you are back in the network before you can commit you changes.

With a distributed model then the .hg folder as in Mercurial is a isolated repository which you can commit to at any time. So you get all the benefits of version control  while off line.  Then when you are finally back on the network you can push your changes to the central server.

Now lets think about what happens when a developer starts writing a new application/website.  Normally they will start developing it up until the point they have a stable beta that they can start to show others.  At which time they normally think its time to put it into version control.  With Subversion you go to the central server and you decide to either import the directory of your application or create a directory name and then check out the new empty trunk into a directory in your machine and copy all the files over to that directory and then commit the files.

With a distributed model when you create your directory for starting you project you just choose to "create a repository here" which will add the .hg folder for Mercurial Version control or .git for Git version control.  Then as you are developing up to that stable beta point you can take advantage of the version control tools like commit, revert, diff, etc.  then when you are ready you can connect to your companies central server.  Create a repository on that server for your Application and finally "push" your changes to a central server.

Only when your change sets are pushed to the central server are they generally available.

For a great tutorial check out http://hginit.com
Posted by Adrian Sweeney at 06:27 No comments: Links to this post

Apple Store is off line ROAR!!!

http://store.apple.com/
So it looks like the release of Lion is going to be happening soon.  I can't wait to see if they are going to announce any new hardware but we will probably have to wait until september for hardware.
Posted by Adrian Sweeney at 03:19 No comments: Links to this post

Email ThisBlogThis!Share to TwitterShare to FacebookShare to Pinterest
Labels: Apple

I'll go with Google+ until some says differently though Twitter is probably #googleplus.  So a couple of friends added me to their Google+ accounts and it emailed me I followed the link and set up my circle of friends.  Then it hit me I didn't have to manually log into Google+ or specify that I wanted a Google+ account.  But I remember sending a request for an invite.  I guess that activated the account for me but I'm wondering if anyone else noticed this?
Posted by Adrian Sweeney at 05:16 No comments: Links to this post

I Jailbroke my iPad

I jailbroke my iPad last week to see what everyone was raving about.  I promptly crashed the device, and I'm impressed by how well the device and the jailbreak works.  Apple have built a device that if it fails to reboot twice (approx 10-15 minutes on the black screen with the silver Apple) the device will go into safe mode. I didn't even know that there was a safemode for the iPad let alone any iDevices.

What had happened is that since I was on an 3G iPad I was looking for software that would flesh out my iPad experience.  I wanted a SMS tool so I could send and recieve text messages so I installed an Cydia App called I believe "iRealSMS 2.0" which didn't work just closes when you start it so I ignored it and that was the problem.  I then installed Winterboard onto the device and Winterboard requires a reboot so when I rebooted I ened up in safe mode and was thinking that the problem was with Winterboard.  Also when I held down my finger on the icon so that it wobbles and could be removed there was no (x) to remove the app.  Eventually I found that the Cydia App has an installed section that allows you to remove installed apps.  Since the Apple App Store doesn't have this I didn't even think about it.

So I uninstalled Winterboard and rebooted but still ended up in safe mode so I then looked at what else I had installed and removed the iRealSMS app and rebooted and hey presto one fully working iPad.  I am so impressed with how the Cydia App Store allows you to uninstall apps.  This of course is because not all apps you buy on the Cydia Store are run via an icon.  For example there is an App "RetinaPad" available for $2.99 this will take any and all iphone apps that have not been updated for the iPhone4 and smooth the rendering for you when you hit the (x2) button.  The quality is amazing and I'll quote here "It's how Apple should have done it".

Other benefits are Choose Web Browser.  Which allows you to specify what browser to open when you click a link in youTube,  Hopefully it will be updated to aloow yout to completely override the browser so that if you click a link it opens that browser rather than Safari.

One thing I noticed is that most Apps are not free except for the thousands of themes that seem to fill the store and navigating the store is not great.  I guess I just got used to the way that the Apple Store does things.  There is a nice list of iPad Extensions & products designed for the iPad but there is no More button to see more of these type of apps.  Also when searching there is nothing that tells you if the App works on an iPad.  If the search result has got blue text then its a paid for app of its Grey then its free.

I see that there is a iRealSMS 3.0 which is a paid for app $12.99 but thats a bit steep since it doesn't give a big description in the store.

If anyone has any decent Apps that I should check out let me know in the comments.
Posted by Adrian Sweeney at 05:46 No comments: Links to this post

Why I believe that Apple should announce FaceTime for other devices

Skype has a great lead and this race is now on. Microsoft's purchase of Skype and deal with Facebook has upped the anti.  This race will be won by the system with the most users.  Skype is in the lead then FaceTime came along and enabled video calling from mobile devices.  Google are going to to launch video chat with their social network Google+.  Where does that leave Apple since they opened the standard for FaceTime I haven't heard of any developers developing a desktop application that will communicate with the FaceTime servers.  That means that if Apple don't release a desktop application for different Operating systems they could be left behind.  Also enabling it across 3G & 4G would be a very good idea.
Posted by Adrian Sweeney at 16:18 No comments: Links to this post

My Ubuntu bucket of fail

Unfortunately and this is not a fault of the Ubuntu Project, I have been unable to get my home machine to install GRUB this is all related to the time I installed Mandrake and then couldn't get rid of the Boot loader that it installed.  I eventually got rid of that by installing vista so that I could do the equivalent of an "fdisk /mbr" statement.  Since that day I've never been able to install another bootloader even though I've taken the drives out of the raid configuration and re ordered them and formatted them and a whole pile of other steps.   This is the first time that the Ubuntu installer as actually picked up that my machine has hardware raid "Nvidia raid" normally I have to put Ubuntu onto a disk by its self.

I've even used the dd command to overwrite the first 512bytes of the hard drive to blank the drives completly.

Its a pity because I really liked what I seen when I ran the live CD.
Posted by Adrian Sweeney at 05:24 No comments: Links to this post